Donate to Back on My Feet to help the homeless.

It’s been three months and seven days, and I am thirty pounds lighter. My Body Mass Index is now 5.2 less than when I began training on January 15.

I didn’t blog over the past several weeks even though I had several posts ready to go. Much of what I had written was a reflection of the seemingly endless cold temperatures and the monotonous workouts in the gym. Since the weather broke about two weeks ago, I have been outside as much as possible. Many of the routines (repetitive playlists, treadmill time) have been replaced with actually enjoyable exercise (biking thirty plus miles at a time). While I should have focused exclusively on running, the truth is that I needed a mental break with my favorite passion (bicycling) to keep up the exercise.

At this point, all the heavy lifting in preparation for the Broad Street Run is complete. I ran ten miles a few weeks ago (with a break in between the two fives) and I have consistently raised my tempo and distance over the past month. I also ran outside for a bit, given how late spring is this year. I’ll keep the workouts going, but I will probably just keep things steady and not look to run another ten miles until the day of the race.

Regarding my weight, I targeted a loss of 35 – 40 pounds by the Broad Street Run (January 15 to May 4). It looks like I just may make the 35 pound loss mark by then. If not, I still have fundamentally altered my fitness, and I think the difference in a few pounds at this stage will not be nearly as dramatic as the first thirty lost in my preparation.

You can see above that I am near my midpoint in my overall weight loss plan. It is important to note that the target loss is if I reach my ideal weight (four months away), which is much different than when I hit a healthy weight (in just about two months). I will include more details in future posts to provide further context, but I have always considered the Broad Street Run as a great near-term goal to spur more longer-term efforts. 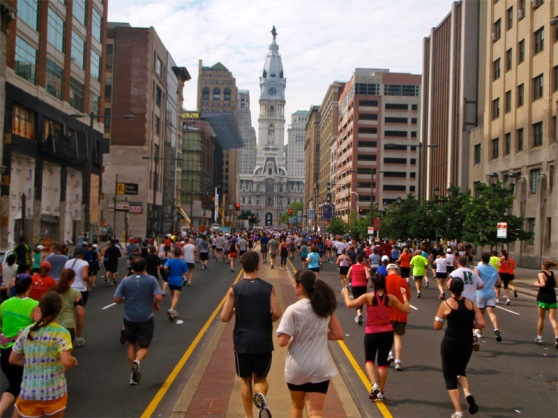