Help me raise $500 for the homeless through the charity Back on My Feet.
Over the course of two days, eleven total miles, half of which was off-trail, all of which was in packed, unplowed snow, my dog and I traversed a scenic state park. And under no uncertain terms, it was not I who was taking her for a walk. Rather, it was a thirteen year old Lhasa Apso with the motor not unlike that of Pete Rose in his prime, who gave me quite the workout.
https://www.instagram.com/p/j4wjDsTMzT/
Luckily, using my Basis B1, I was able to track every little detail, to confirm how much more in shape my family’s lap dog is than me. First, some baselines are important:

On Sunday we had a pretty good day (the full seven mile loop around the lake): 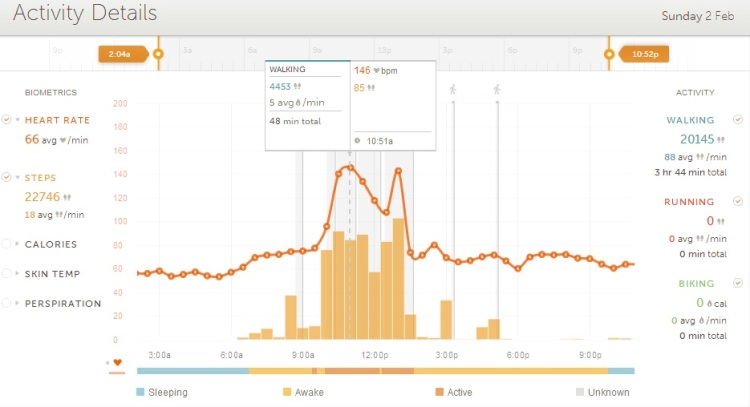 My peak heart rate during the hike coincided with a trek up an eight percent gradient (the subsequent decline was the trek down the other side). Given the snow and heavy duty winter boots, the hike became a great exercise, especially over a period of four hours. With a total of 22,746 steps taken, I had a good hunch that I had made some room for a few extra calories for Super Bowl Sunday (given my daily target is 1,200 calories consumed):

So, naturally, I indulged, as you can see below: 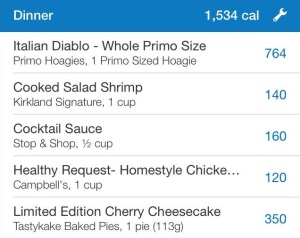 In the end, I had consumed just under 2,100 calories and burned a total of 3,200. Sounds good, right? Well the truth is, I should have probably increased the total caloric intake just to be safe and also changed the makeup of those calories (but hey, it is the Super Bowl, right?). Better do so next time:

Carbohydrates were the killer here. And quite frankly I would like to up the protein (although its good relative to the recommended percentage). The pie chart incorporates the whole day’s worth of meals, including my orange juice, three bananas and various granola bars to get through the hike.

In general, for a “cheat day”, it was not that bad. My definition of a cheat day is quite different from the generally accepted one: I try to maintain the same calorie deficit but I allow for not as healthy compositions of the consumed calories. Essentially, things taste better on the weekends when I allow for the seasonings and flavors that come with fattier foods. The other important point to consider is that I must offset the overall increase in total calories consumed with considerably more exercise than I usually have in a weekday. In concept, this should not be too hard, given weekdays are filled with time sitting at a desk. In practice, we all know it can be quite appealing to just Netflix a weekend away (especially with House of Cards Season 2 premiering Valentines Day!).

Anyway, given the number of steps, the consistency of the pace, the duration of the exercise, and the variation in the gradient, it is no wonder why my dog ended up sleeping sitting up in the passenger seat of my car two minutes after we left the park…